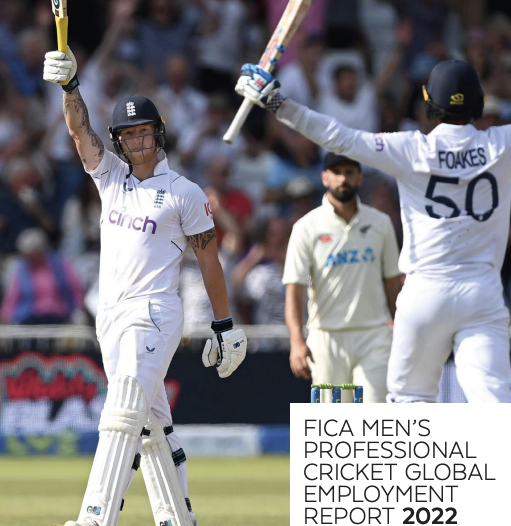 The Federation of International Cricketers’ Associations (FICA) today released its third Men’s Professional Cricket Global Employment Report 2022. A copy of the Report can be accessed HERE.

The Report is the most substantial piece of research conducted with players on a global scale and is intended to provide an evidence based analysis of the global game and player employment market, as the game evolves at a rapid pace.

The Report is based on analysis of significant research and draws on qualitative and quantitative surveying of more than 400 current professional and international players globally, surveying of players’ associations globally, statistical data from Cricket Archive, direct player engagement and other credible sources.

FICA brings together the world’s ‘organised’ professional cricketers and its Employment Reports have been released biennially since 2018. FICA will be releasing its next Women’s Global Employment Report in the coming months.

Three of the key trends highlighted in the Report include:

“Player decisions continue to impact the direction of the game, and an understanding of these, and of the global employment market, should be a pre-requisite to ensuring good decisions are made by the game’s leadership. The development of a coherent global structure for the game that ensures international cricket and domestic leagues can co-exist continues to be a pressing priority and it requires global leadership and compromise to find collective solutions.”

“Whilst we are encouraged by recent comments from the ICC Chairman, we remain concerned by ongoing opposition to players forming or joining a players’ association in several countries. Our game should be creating a safe space for players to have a voice in all countries and at global level, and players should not face bullying or intimidation for simply exercising their right to organise, which is protected under international law.”

A copy of the report can be accessed HERE

The Executive of the Federation of International Cricketers’ Associations (FICA) met in Sydney on 9th, …